As a former Playboy playmate, jeans model, widow of an octogenarian oil tycoon and reality TV star, Anna Nicole Smith's life played out like an extraordinary tabloid tale. It appears her death will too. 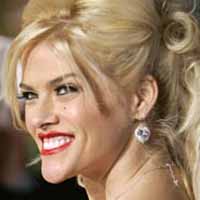 An emergency hearing was planned for Friday in a paternity dispute involving Smith's 5-month-old daughter, a day after the 39-year-old curvaceous blonde died after collapsing at a hotel.

Smith was stricken while staying at the Seminole Hard Rock Hotel and Casino and was rushed to a hospital. Edwina Johnson, chief investigator for the Broward County Medical Examiner's Office, said the cause of death was under investigation and an autopsy would be done on Friday.

Dr. Joshua Perper, who was to perform the autopsy, said that if Smith died of natural causes, the findings would likely be announced quickly. He cautioned, however, that definitive results could take weeks, reports AP.

"I am not a prophet, and I cannot tell you before the autopsy what I am going to find," he said.

Seminole Police Chief Charlie Tiger said a private nurse called emergency services after finding Smith unresponsive in her room at the hotel, which is on an Indian reservation. He said Smith's bodyguard administered CPR, but she was declared dead at a hospital. Later Thursday, two sheriff's deputies carried out at least eight brown paper bags sealed with red evidence tape from Smith's hotel room.

Just five months ago, her 20-year-old son, Daniel, died suddenly in the Bahamas. An American medical examiner hired by the family, Cyril Wecht, said he died accidentally of a combination of methadone and two antidepressants.