Envoys to international talks on ending North Korea's nuclear weapons hit a stumbling block Friday when they failed to back a Chinese proposal for initial disarmament, the main U.S. delegate said. 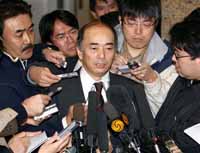 U.S. Assistant Secretary of State Christopher Hill said the Chinese draft proposal, put forward after the talks' first day Thursday, was discussed at a meeting of the delegation heads from the six countries involved.

"Opinions were expressed around the room, sometimes divergent opinions on the Chinese draft," Hill said. "There are some differences of views among the various delegations."

Officials declined to confirm details of the draft.

The U.S. and North Korean envoys held a one-on-one meeting on the proposal later Friday at a Beijing hotel away from the main negotiating venue.

"We discussed ways to move the talks forward," the North's Kim Kye Gwan told reporters afterward. "We agreed on some issues, but overall there are still some points of confrontation, and we are going to make more efforts to resolve them."

Hill said he was "cautiously optimistic, but I don't want to count chickens before they hatch."

"There is a realization that the first step that we are looking at is the big first step ... So I think they want to be sure they understand what is expected of them," Hill said.

The U.S. diplomat said some negotiators' concerns focused on which elements would be implemented under the current proposal, and which would be put off until future negotiations. He declined to give specifics, reports AP.

Any agreement on an initial set of reciprocal moves to implement a September 2005 accord in which North Korea pledged to disarm in exchange for aid and security guarantees would set the stage for the first tangible steps in the often-delayed six-nation process.