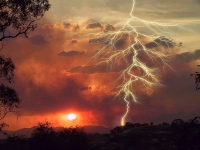 Officials were determining whether tornadoes touched down, and tornado warnings issued around midnight remained in effect.

Lake County sheriff's spokeswoman Christie Mysinger confirmed the deaths to WKMG-TV but did not say how they occurred. She did not immediately return phone messages left by The Associated Press.

Mike Turner, a technician with the National Weather Service in Melbourne, said it appeared at least one fatality occurred in the Lady Lake area, which is about 50 miles (80 kilometers) northwest of Orlando.

Dozens of mobile homes near Lady Lake were destroyed. Chairs, beds and clothes were strewn about yards, and debris hung from trees. Some homes were tossed from their foundations, while others had their roofs ripped off.

The storms moved across Sumter and Lake counties around 3:15 a.m., then moved to Volusia County, said Peggy Glitto, a weather service meteorologist.

"Radar indicated that there were tornadoes, but we're going to send someone out to assess the damage and should know more this afternoon," Glitto said.

About 20,000 customers were without power across a wide swath of central Florida, Progress Energy spokeswoman Cherie Jacobs said.

Florida Power & Light reported about 200 customers without power in the DeLand area.