The warning from a top panel of international scientists was blunt and dire: "warming of the climate system is unequivocal," the cause is "very likely" man-made, and the menace will "continue for centuries." 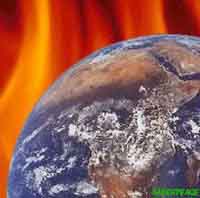 Authors of the 21-page report released Friday on why the planet is warming by the Intergovernmental Panel on Climate Change placed the onus on governments to stop prevaricating and take action.

The message to be taken home from the report is "it's later than we think," panel co-chair Susan Solomon, from the U.S. National Oceanic and Atmospheric Administration, told The Associated Press in an interview.

The report and the scientists who wrote it called the document conservative only using peer-reviewed published science, edited by representatives of 113 governments that also had to agree to every word. It is a snapshot of where the world is with global warming and where it is heading, but does not tell government officials what to do.

Yet if nothing is done, the world is looking at more than 1 million dead and hundreds of billions of dollars (euros) in costs adapting to a warmer world with more extreme weather, study co-author Kevin Trenberth said in an interview.

The next step is up to public officials, scientists said. "I want to see action not messages," said Swiss scientist Thomas Stocker, a co-author.

"It is critical that we look at this report ... as a moment where the focus of attention will shift from whether climate change is linked to human activity, whether the science is sufficient, to what on earth are we going to do about it," U.N. Environment Program Executive Director Achim Steiner said.

"The public should not sit back and say 'There's nothing we can do'," Steiner said. "Anyone who would continue to risk inaction on the basis of the evidence presented here will one day in the history books be considered irresponsible."

Another report by the panel later this year will address the most effective measures for slowing global warming.

If it looks bad now, the harmful effects during the 21st century "would very likely be larger than those observed during the 20th century," the report said.

The projected effects of global warming would vary in different parts of the globe. The closer to the poles, the higher the temperature spikes, according to the report. Dramatic and noticeable temperature spikes are likely to be seen within 22 years in most of the Northern Hemisphere, the report showed. Northern Africa and other places will see dramatically less rainfall.

And that's just average temperature increases and rainfall amounts, something that doesn't affect people much. People experience the harshest of global warming with extreme weather events heat waves, droughts, floods, and hurricanes said study co-author Philip Jones of Britain's University of East Anglia. And those have increased dramatically in the past decade and will get even worse in the future, he said.

On sea levels, the report projects rises of 7-23 inches (18-58 centimeters) by the end of the century. An additional 3.9-7.8 inches (10-20 centimeters) are possible if recent, surprising melting of polar ice sheets continues.

"The situation is more dire than (at the time of the 2001 report) because we have real possibilities that the situation can be much greater than we have seen before," said Trenberth, director of climate analysis at the U.S National Center for Atmospheric Research.

A colleague from the center, Gerry Meehl, warned that continued global warming could eventually lead to an "ice-free Arctic." And when that happened 125,000 years ago, seas rose between 13 and 20 feet (4-6 meters). That is looking like a real possibility for the 22nd Century, the report said, but some scientists fear much of that may happen before the end of the 21st Century.

The report said no matter how much civilization slows or reduces its greenhouse gas emissions, global warming and sea-level rise will continue for centuries.

"This is just not something you can stop. We're just going to have to live with it," Trenberth said in an interview. "We're creating a different planet. If you were to come back in 100 years' time, we'll have a different climate."

Scientists worry that world leaders will take that message in the wrong way and throw up their hands, Trenberth said. That would be wrong, he said. Instead, the scientists urged leaders to reduce emissions and also adapt to a warmer world with wilder weather.

"You make a difference on hundred of years' time frame, but this is the future of the planet," Trenberth told The Associated Press. "We have to adapt to it."

Trenberth said the world is paying more attention to scientists now than in previous warnings in 1990, 1995 and 2001. "The tension is more now," he said.

The head of the U.S. delegation, White House associate science adviser Sharon Hays, called the panel's summary "a significant report. It will be valuable to policy makers."

As the IPCC report was being released, environmental activists rappelled off a Paris bridge and draped a banner over a statue used often as a popular gauge of whether the Seine River is running high, reports AP.

"Alarm bells are ringing. The world must wake up to the threat," said Catherine Pearce of Friends of the Earth.