Gray wolf to be taken off endangered list in 2 northern U.S. regions

Once hunted to near extinction, gray wolves in the western Great Lakes region and the northern Rocky Mountains have rebounded so successfully that they will be taken off the endangered species list, officials said. 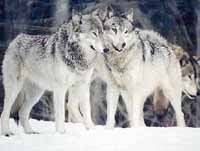 Gray wolf to be taken off endangered list in 2 northern U.S. regions

The Interior Department said Monday it would remove about 4,000 wolves in the northern states of Michigan, Minnesota and Wisconsin from the endangered and threatened species list in about a month. Officials from state governments and Indian tribes will be responsible for keeping their numbers at healthy levels.

The department hopes to take the same action for about 1,200 wolves in Idaho, Montana and Wyoming within a year.

"Today, through this action, we recognize a comeback of the wolves," Deputy Interior Secretary Lynn Scarlett said in a conference call with reporters.

Government-approved bounty hunting nearly wiped out the wolf in the lower 48 states by the 1950s. Changing attitudes led to their protection in 1974 under the newly enacted Endangered Species Act.

The federal government will continue monitoring wolf populations for five years after they are dropped from the list and can return them on an emergency basis if necessary.

States and American Indian tribes are developing management plans dealing with touchy issues such as whether to allow sport hunting of wolves and how to deal with livestock depredation.

All three Great Lakes states would prohibit trophy wolf hunts for at least five years, while Idaho's governor has said he would push for immediate hunting to slash wolf numbers. Wyoming is pushing for greater authority to authorize killing wolves to protect livestock and wildlife.

"Restoring the wolf to its place in the natural world while addressing conflicts with people is a difficult balancing act," Scarlett said. But managers, scientists and educators in state wildlife agencies "have strong working relationships with local landowners and the ability to quickly deal with potential conflicts," she said.

At their low ebb, a few hundred wolves in Minnesota were all that remained in the Great Lakes region. After being listed, they quickly increased and migrated east. Latest estimates show more than 3,000 in Minnesota, over 460 in Wisconsin and more than 430 in Michigan, plus 30 on Isle Royale in Lake Superior, reports AP.

"A classic Endangered Species Act success story," said Rodger Schlickeisen, president of the environmentalist group Defenders of Wildlife. "The remarkable recovery efforts to restore the wolf have paid off, and the states are ready to assume the responsibilities of managing their own wolf populations."

But environmentalists said the proposal to delist Northern Rockies wolves was premature and that management plans drawn up in those states seemed designed for eradication rather than protection. Other critics say the government is moving too slowly to shield elk and other prey animals from wolves.