Pope Benedict XVI's talks Thursday with Vietnam's prime minister mark an important step toward establishing diplomatic relations, the Vatican said after the highest-level meeting between the Holy See and the communist government following decades of tension. 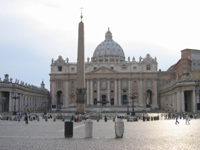 "The Holy See has expressed its satisfaction with the visit, which marks a new, important step toward the normalization of bilateral relations" between the Vatican and Vietnam, a statement said.

The Vatican also praised "concrete progress" in recent years toward "opening new spaces of religious freedom for the Catholic church in Vietnam."

Earlier in the week, a Vietnamese cardinal said there were no obstacles to establishing formal relations that have been strained for decades.

Usually, at top-level audiences, the pontiff meets alone with his visiting guest. But joining the pope and Dung for their talks was Vietnam's official in charge of religious affairs, Ngo Yen Thi.

Benedict, smiling, greeted a pleased-looking Dung. Dung was scheduled to participate in a news conference in Rome after meeting later with Italian Premier Romano Prodi.

For decades, there have been tensions between the Vietnamese government and the Church, particularly over Hanoi's insistence on having the final say in most church appointments.

There has been speculation that official ties with the Church could further Catholic assistance in medical care and other social services for the Vietnamese people, and the Vatican statement appeared to indicate real prospects for that.

The Vatican said it hoped dialogue would "lead to a fruitful cooperation between church and state so that Catholics can ... make a positive contribution to the common good of the country."

It cited the promotion of moral values, especially among the young, as well as help for the needy.

During Mass on Thursday at Hanoi's St. Joseph Cathedral - where worshippers spilled out into a courtyard - a loud round of applause erupted among the faithful when Archbishop Ngo Quang Kiet mentioned Dung's visit to the Vatican.

"We have high hopes for this visit," the priest said. "We hope that it will strengthen the Catholic Church's role in Vietnam and allow us to contribute more to the development of education, health care and social welfare in Vietnam."

On Tuesday, the archbishop of Ho Chi Minh City, Cardinal Jean-Baptiste Pham Minh Man, said after holding talks with Vietnamese officials, including the president, that formal ties should follow soon, the AP reports.

Other positive signs for the Church included the ordination in 2005 in Vietnam of dozens of priests in a ceremony led by a top Vatican cardinal.