The United Nation's first all-female peacekeeping force made up of 105 Indian policewomen is set to deploy to the troubled west African country of Liberia, an official said Friday. 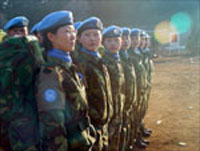 The team, which has been training since September, leaves for Liberia on Sunday, said Abhishek Dayal, a spokesman for India's Central Reserve Police Force, which contributed the officers.

"They will initially stay there for six months and then it will depend on the U.N.," Dayal said.

There, they will likely to be called on to train Liberia's national police, help conduct local elections or assist with prison security as the West African country struggles to return to normalcy after years of civil war.

India has been a major contributor to U.N. peacekeeping missions for decades, and has sent women as part of earlier contingents, too.

However, this is the first all-female peacekeeping team and participants have said it would have unique advantages in conflict zones.

"Women police are seen to be much less threatening, although they can be just as tough as men. But in a conflict situation, they are more approachable and it makes women and children feel safer," Seema Dhundia, a unit commander, said recently.

All peacekeepers have battled insurgencies in India's own trouble spots Islamic militants in Kashmir, separatist guerrillas in the tropical jungles of the northeast and Maoist rebels in central India.

About 200,000 Liberians are believed to have been killed in the 1989-2003 civil war, which also displaced half the country's 3 million people. The country founded by freed American slaves in 1847 is still struggling to recover.

Some 15,000 U.N. peacekeepers are providing security in Liberia under a 2003 peace deal that ended fighting.