U.S. Secretary of Defense Robert Gates, on his second trip to Iraq in less than a month, arrived unannounced Friday in this southern city to consult with British and other allied commanders. 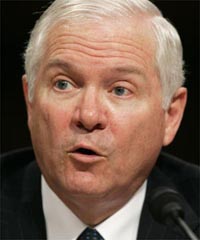 Britain, which has the largest troop contingent among the U.S. allies, with about 7,000 soldiers in the Basra area, is planning to withdraw a large portion of them this year.

Gates said at the outset of his weeklong overseas trip that he realized the security situation in southern Iraq is different than in Baghdad, where the United States is building up its troop strength.

Gates was meeting with Gen. George Casey, the top U.S. commander in Iraq, as well as Maj. Gen. Jonathan Shaw, the newly arrived commander of British forces here. Later Gates was to meet with commanders from Poland, Australia, Denmark and Romania, and have lunch with coalition troops who are training the Iraqi army.

On his first visit to Iraq after being sworn in on Dec. 18, Gates met in Baghdad with U.S. commanders and Iraqi government leaders just weeks before U.S. President George W. Bush announced his new strategy for Iraq, which includes sending an additional 21,500 troops, most to Baghdad and the western Anbar province.

After meeting earlier with the leaders of Saudi Arabia and Qatar, Gates said Thursday that those two key U.S. allies in the Persian Gulf remained skeptical of the Iraqi government and are not fully convinced Bush's plan for stabilizing Baghdad will succeed.

Gates told reporters both want the United States to succeed in Iraq. But asked whether they expressed full confidence in the Bush plan for quelling sectarian violence in Baghdad, the Pentagon chief replied, "I would say that they expressed hope."

"I think they're both concerned about the situation in the country and the level of violence," he said.

Gates met with the Emir of Qatar, Sheikh Hamad bin Khalifa al-Thani, at a palace in Qatar; on Wednesday night he met with King Abdullah of Saudi Arabia at a royal hunting lodge out of Riyadh, the capital, reports AP.

"What I took from their comments was clearly concern about whether the government of Prime Minister (Nouri al-) Maliki can actually deliver on its commitments quite frankly, these are reservations that have been expressed in Washington, and we will be watching," he told reporters after flying to Manama, Bahrain.

Gates' overseas tour began in London and took him to NATO headquarters in Brussels, Belgium, and to Afghanistan before he arrived in the Gulf on Wednesday.