The Ethiopian military provided the targeting intelligence used by a U.S. Special Forces aerial gunship in a strike in southern Somalia that reportedly killed a top al-Qaida figure, a U.S. military official said on Wednesday. 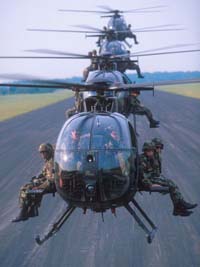 The raid, conducted by an AC-130 gunship early Monday on a remote island at the southern tip of Somalia, was done in "close cooperation" with Ethiopia, a U.S. ally in the war on terror, said the U.S. official, who spoke on condition of anonymity because of the sensitivity surrounding U.S. Special Operations missions.

"We acted on time-sensitive intelligence and made the strike in cooperation with the Ethiopians," the U.S. official said, who is based in the region. He said Ethiopia provided the intelligence tip.

A single AC-130 gunship handled the raid on a group of "senior al-Qaida operatives," the official said.

A senior Somali official said Wednesday that the A130 strike killed Fazul Abdullah Mohammed, one of the FBI's most wanted terrorists, who has evaded capture for eight years. Mohammed was accused of planning the 1998 attacks on the U.S. Embassies in Nairobi and Dar es Salaam, Tanzania, which killed 225 people. There was no immediate U.S. confirmation of the report.

On Tuesday, helicopter gunships attacked suspected al-Qaida fighters in the south in an assault that a Somali lawmaker said had killed 31 civilians.

The U.S. military official said the strike was probably carried out by Ethiopia since the aircraft were identified as Russian-made Hind helicopter gunships of the type used by the Ethiopian military. Previous reports differed on whether the helicopters used were Ethiopian or American, reports AP.

The official declined to comment on any ongoing U.S. operations in Somalia, nor on a Somali government request Wednesday for U.S. Special Forces ground troops.

U.S. Defense Department officials, speaking privately Tuesday in Washington because the department was not releasing the information, suggested the U.S. military was either planning or considering additional strikes in Somalia.