Russia's highest court on Tuesday upheld a life sentence for the only militant known to have survived the 2004 Beslan school siege that killed more than 300 people. 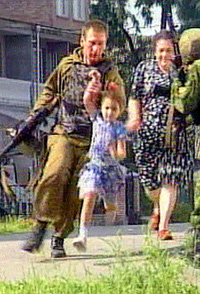 In May, Nur-Pashi Kulayev was convicted in the attack by a court in southern Russia. The Supreme Court upheld its verdict Tuesday, rejecting appeals from his lawyers and relatives of the victims, court spokesman Pavel Odintsov said.

Ella Kesayeva, the head of Voice of Beslan group of victims' relatives, said on the Ekho Moskvy radio that Kulayev's trial failed to properly investigate the circumstances of the raid and botched rescue efforts.

The Sept. 1-3, 2004 attack on Beslan's school No. 1 by militants demanding the withdrawal of Russian troops from the conflict-torn province of Chechnya killed 334 people, more than half of them children, as well as 31 suspected militants and 11 elite special forces soldiers.

Most of the victims died when explosions tore through the school and security forces stormed the building.

Victims, relatives of those killed and critics have blamed security forces for a botched rescue operation and their failure to prevent the raid. They contend a series of investigations were cover-ups for official incompetence.

A parliamentary commission that conducted one of several official probes presented its final report Friday. It criticized local law enforcement authorities for ignoring instructions to guard the school and other such sites against a potential attack laying the blame squarely on lower-level security officials.

The commission's chief, Alexander Torshin, said that the explosion precipitating the bloodshed was a bomb set off by the militants and there was no firm evidence that tanks had opened fire on the building while hostages were inside contradicting eyewitness accounts, including by The Associated Press.

Kesayeva on Tuesday assailed Torshin's commission for trying to whitewash evidence of official incompetence. "They didn't want to find the truth," she said.