Turkmenistan's acting president announced Friday that the date for elections to replace the ex-Soviet republic's late long-ruling dictator will be set next Tuesday. 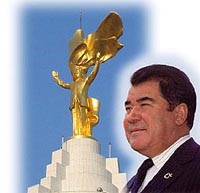 He promised they would be democratic, but the candidates for president are to be nominated and there was no indication that this one-party state intends to introduce democracy after long-entrenched repressive rule.

President Saparmurat Niyazov, 66, died from heart failure Thursday after 21 years at the helm of this gas-rich Central Asian nation. Niyazov held absolute power and created an elaborate cult around himself since the nation of 5 million became independent with the 1991 Soviet collapse.

The date of the next presidential elections will be set by the People's Council, the country's highest legislative body, at a session scheduled for Dec. 26, acting President Gurbanguli Berdymukhamedov decreed.

"National presidential elections will be held on a democratic basis that has been laid by the great leader," said the decree that was carried by official newspapers.

The decree also said that the People's Council on Tuesday will consider "candidates nominated for the president's post."

The People's Council is made up of about 2,000 officials and elders that were hand-picked by Niyazov. Niyazov used the Council to endorse his most important decisions, the AP reports.

Turkmenistan last held presidential elections in 1992 which Niyazov won with 95.5 percent of the vote. In 1999 he was named president for life, but in recent years he pledged to step down and hold elections by 2010.