The blast rocked Washington's Embassy Row on Sept. 21, 1976. A bomb placed by agents of Chilean dictator Augusto Pinochet ripped through the car of one of his outspoken critics, killing Orlando Letelier and his American assistant. 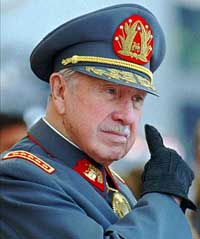 The dictatorship's bloody strike in the American capital just two miles (three kilometers) from the White House prompted demands for explanations and helped expose what President Richard Nixon, his Secretary of State Henry Kissinger and a succession of CIA officials tried for years to conceal: U.S support for a military dictatorship that was killing thousands of its own citizens.

Yet three decades later, in the wake of Pinochet's funeral on Tuesday, many more documents about U.S. ties to Pinochet remain classified, and Letelier's colleagues are still demanding answers.

Officials at the Washington-based Institute for Policy Studies, where Letelier and Moffitt worked, said they will send a letter this week Thursday urging the U.S. attorney general to release the remaining documents, now that Pinochet is dead.

"The documents related to the Letelier case definitely could include embarrassing information about the relationship between the U.S. government and the Pinochet dictatorship," said Sarah Anderson, a fellow at the think tank. "But that shouldn't outweigh the public's right to know about that history, especially if it gives consolation to the victims' families."

A series of Congressional investigations, CIA reports and declassified documents have already revealed much about about that relationship.

They indicate that U.S. officials did not directly participate in the military coup on Sept. 11, 1973 that toppled Chile's Marxist president, Salvador Allende. But the CIA said it had advance warning of the coup and had tried to foment earlier coup attempts on direct orders from Nixon and Kissinger.

A report released by the CIA in 2000 said the agency had been "aware of coup-plotting by the military, had ongoing intelligence-collection relationships with some plotters and -- because CIA did not discourage the takeover and had sought to instigate a coup in 1970 -- probably appeared to condone it."

A secret cable from the CIA deputy director of plans, Thomas Karamessines, conveyed Kissinger's orders to CIA Santiago station chief Henry Hecksher in 1970: "It is firm and continuing policy that Allende be overthrown by a coup," and that the "American hand" be hidden, reports AP.