Ailing leader Fidel Castro on Tuesday told hundreds of admirers who traveled here for his delayed 80th birthday celebration that he was not well enough to meet with them. 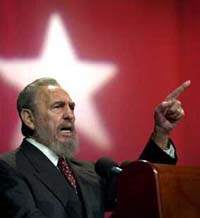 In a message read to Latin American artists at the launch of his five-day birthday bash, Castro said his doctors told him he was not in condition to meet with such a large crowd at the Karl Marx Theater.

Castro's message did not rule out an appearance later in the week, but made it seem much less likely. He has been seen by the public only in photos and videos since his July 31 announcement that he was temporarily ceding power to his brother, 75-year-old Defense Minister Raul Castro, while he recovered from surgery for intestinal bleeding.

"I direct myself to you, intellectuals and prestigious personalities of the world, with a dilemma," said the note read at the gathering of 5,000 people that was broadcast live by state television across the island of 11.2 million. "I could not meet with you in a small locale, only in the Karl Marx Theater where all the visitors would fit, and I was not yet in condition, according to the doctors, to face such a colossal encounter."

With or without Castro, more than 1,300 politicians, artists and intellectuals from around the globe are determined to honor the man who governed this communist-run island for 47 years before stepping aside four months ago after intestinal surgery.

"My very close friends, who have done me the honor of visiting our country, I sign off with the great pain of not having been able to personally give thanks and hugs to each and every one of you," Castro wrote.

The crowd responded with a standing ovation.

Presidents Evo Morales of Bolivia and Rene Preval of Haiti have confirmed their attendance, along with former Ecuadorean President Rodrigo Borja and Nicaraguan President-elect Daniel Ortega.

Details of Castro's ailment and his medical treatment are state secrets.

Despite periodic statements by Cuban officials that Castro is recovering, U.S. officials say they are convinced he suffers from some kind of inoperable cancer and won't live through 2007.

The birthday celebrations are sponsored by the foundation of the late Ecuadorean painter Oswaldo Guayasamin and began with the gala cultural gathering at the theater. Guayasamin, who died in 1999, painted four portraits of Castro over the years and joined him once every decade to celebrate his birthday.