Pope Benedict XVI has urged religious leaders of all faiths to "utterly refuse" to support any form of violence in the name of faith, while Turkey's top Muslim cleric complained to the pontiff of a growing "Islamophobia" in the world. 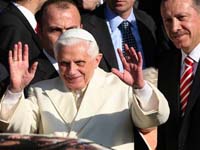 As he began his first visit to a Muslim country Tuesday a trip that drew extraordinary security but few onlookers Benedict sought a careful balance as he held out a hand of friendship and "brotherhood" to Muslims, hoping to end the outcry from many Muslims over his recent remarks linking Islam to violence.

In a gesture welcomed by his hosts as well as the Muslim world-at-large, he expressed support for Turkey's efforts to join the European Union, moving away from opposition he voiced when he was a cardinal.

But the German pope also hammered away at key points of his 18-month papacy, telling diplomats that leaders of all religions must "utterly refuse to sanction recourse to violence as a legitimate expression of faith."

He avoided mention of any specific religion, even as he decried terrorism and the "disturbing conflicts across the Middle East."

Benedict also said guarantees of religious freedom are essential for a just society, and the Vatican said he raised specific issues such as property rights of Turkey's tiny 32,000-member Catholic community during talks with Turkish officials.

His comments could be reinforced later during the four-day visit when the pope meets in Istanbul with Ecumenical Patriarch Bartholomew I, the spiritual leader of the world's Orthodox Christians.

The pope is expected to call for greater rights and protections for Christian minorities in the Muslim world, including the tiny Greek Orthodox community in Turkey.

The 79-year-old clearly made reconciliation a priority of his first day, taking on a taxing series of meetings that saw him needing a drink of water after coughing repeatedly while addressing the diplomats in the last public appearance in the evening.

Benedict's journey is extraordinarily sensitive, a closely watched pilgrimage full of symbolism that could offer hope of religious reconciliation or deepen what many say is a growing divide between the Christian and Islamic worlds.

Seeking to ease anger over his perceived criticism of Islam, Benedict met with Ali Bardakoglu, chief of Turkey's Religious Affairs Directories, warmly grasping hands. Benedict sat nearby as the cleric defended his religion.

"The so-called conviction that the sword is used to expand Islam in the world and growing Islamophobia hurts all Muslims," Bardakoglu said.

The comment appeared to be a reference to Benedict's remarks in a speech in September when he quoted a 14th century Christian emperor who characterized the Prophet Muhammad's teachings as "evil and inhuman, such as his command to spread by thye sword the faith he preached."

The Vatican described the cleric's speech as "positive, respectful and non-polemical," applauding what the church sees as efforts for a true dialogue between faiths, reports AP.

On Sunday, more than 25,000 Turks showed up to an anti-Vatican protest in Istanbul, asking the pope to stay at home, but on the streets of Ankara most people went about their usual business and only a tiny protest was held outside the religious affairs office hours before the pope arrived.