Turkish security teams fanned out across the Turkish capital on Tuesday before the arrival of Pope Benedict XVI on his first visit to a predominantly Muslim country, where he faces public anger over his remarks on violence and Islam. 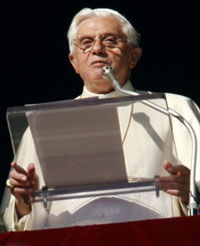 Before departing from Rome, the pontiff said he was embarking on a "trip of dialogue, brotherhood and reconciliation at this difficult moment in history."

Turkish police set up positions along the highway leading to Ankara from the airport, where Turkish and Vatican flags waved in a light breeze. Snipers climbed atop buildings and hilltops. In wooded areas along the route, soldiers in camouflage fatigues set up observations points and sniffer dogs passed along bridges, reports AP.

Authorities have imposed security that is tighter than even for the visit of U.S. President George W. Bush in 2004 in attempts to block another possible wave of protests against the pope, whose comments in September brought widespread backlash and denunciations across the Muslim world.

Benedict is to arrive at Ankara's airport at around 1 p.m. (1000 GMT), where he will meet briefly with Turkish Prime Minister Recep Tayyip Erdogan, who waited until the day before Benedict's arrival to announce that he would make time to see the pope.

According to news reports, some 3,000 police officers have been assigned to guard the pope upon his arrival in the dusty, sprawling capital. Police also were mobilizing and staking out spots in Istanbul, where Benedict will spend most of his four days in Turkey.

"We have taken all the necessary measures and observations of the route the pope (will travel) and the places the pope will visit," Istanbul police spokesman Ismail Caliskan said.

Turkish newspapers showed both hope for and outrage over the trip.

"A forced guest!" said the pro-Islamic newspaper Vakit in a front page headline.

An editorial in the liberal Milliyet newspaper described the trip as a "historic chance to scatter black clouds that are hanging between the Islamic and the Western world."

"The need to develop a new understanding has never been so vital," it said.

On Monday, a group of around 100 pro-Islamic demonstrators displayed what they said were a million signatures for a petition demanding that the Haghia Sophia, now a museum in Istanbul, be declared a mosque and opened to worship for Muslims.

The Haghia Sophia was built in the 6th century as a Christian church, but was converted to a mosque in 1453 when Islamic armies conquered the city then a Christian metropolis called Constantinople.

In a speech on Sunday, Benedict said he was coming to Turkey as a friend of the Turks and asked his followers to pray for him. That same day, more than 25,000 Turks showed up to an anti-Vatican protest in Istanbul, asking the pope to stay at home.

The visit to Turkey will be a test of whether Benedict can soften some of the Christian-Muslim tensions that boiled over after he quoted a Byzantine emperor who characterized some of the teachings of Islam's prophet Muhammad as "evil and inhuman."

The visit will also be a test of the Turkish public's willingness to tolerate criticism of Islam and their ability to coordinate a massive and potentially problematic visit.

Justice Minister Cemil Cicek, who is also the government's spokesman, said the visit was an opportunity for improved relations between the Christian and Muslim worlds.