Delayed for years and partially redesigned, a Shanghai skyscraper that will be one of the world's tallest buildings has hit another snag, this time over its name. 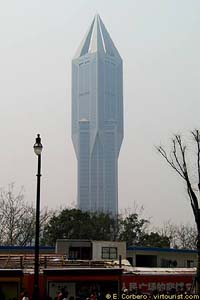 Shanghai media reported Wednesday that the city has yet to approve the renaming of the 101-story Shanghai World Financial Center to "Shanghai Hills". The new moniker was announced Monday by the builder, the Mori Building Co. of Tokyo.

"It's like a person can't change his or her name at will without registering with the government," Liu Bo, an official with the Shanghai Urban Planning Administrative Bureau, was quoted as saying in the Shanghai Daily newspaper.

No application to change the name has been received, Liu said.

There were no indications of objections to the new name, although Liu was quoted as saying the builders could face a fine of up to 30,000 yuan (US$3,750) if they open the tower without approval for the name. No one at the bureau was available for comment Wednesday.

The Mori Co. said the name change would bring the property in line with its other projects, including Tokyo's famed Roppongi Hills and Omotesando Hills complexes. Mori Co. representatives were not immediately available for further comment, reports AP.

For six years the project was little more than a hole in the ground after the Asian financial crisis virtually obliterated demand for new office space.

After the project was revived in 2003, the builders had to alter a key design feature - a circular cutout near the top - after complaints that it resembled the rising sun on Japan's flag, a symbol reviled by many Chinese because of Japan's brutal occupation of the country in World War II.

When completed, the tower will be the tallest in China.

The world's tallest skyscraper is a 1,679-foot-tall (511-meter) building in Taiwan, completed in 2003. The highest freestanding tower is the CN Tower, a 1,815-foot (553-meter) communications structure and outlook point in Toronto.