Forty-eight orangutans rescued from an amusement park in Thailand returned home to Indonesia Wednesday and will soon start a new life in a jungle reserve on their native Borneo island, officials said. 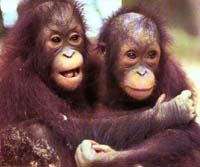 The animals who were forced to perform in daily boxing matches in Thailand before being confiscated in August 2004 were flown to the capital, Jakarta, on board an Indonesian military transport plane.

Their plight has highlighted Southeast Asia's thriving black-market animal and plant trade, which officials say generates some US$10 billion (Ђ7.9 billion) in revenue each year third only behind illicit arms and the drug trade.

While much of the trade goes on behind closed doors, many markets across the region sell rare or endangered animals, from parrots to black bears to gibbons that often end up in safari parks or circuses.

Southeast Asia's Sumatra and Borneo islands are the orangutans' last homes, and environmentalists say the estimated 60,000 animals remaining could disappear from the wild within the next decade.

The wife of Indonesia's president welcomed the animals at the airport.

"We are very happy to get the orangutans back," Kristiani Yudhoyono said at a ceremony. "They belong to our vast nation, therefore we have to take them back to their habitat in a proper way."

They were due to fly to Kalimantan in the Indonesian section of Borneo island later Wednesday to a rehabilitation center and wildlife reserve, said Aldrianto Priadjati, an orangutan conservationist who helped organize the homecoming.

He said the animals were in good condition, but will need medical tests and kept in cages for around one month at the center.

"Our struggle has not finished yet," he said. "Their return is only the first step."

The animals were seized from the private Safari World zoo near Bangkok and have since been kept in a wildlife breeding center. Five other Indonesian orangutans taken from the zoo remained in Thailand for medical treatment, said forestry ministry official Mashyud.

The orangutans were to have been repatriated Sept. 23 but the generals who staged a military coup against the Thai government of Prime Minister Thaksin Shinawatra refused to allow a foreign military airplane to land in Thailand at that time.