With his popularity at an all-time low, Israeli Prime Minister Ehud Olmert's most dangerous emerging opponent is not a politician but a controversial and wildly popular billionaire philanthropist. 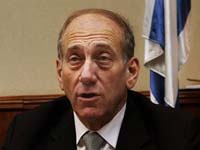 In an interview with The Associated Press Monday, Arkady Gaydamak, 54, a Russian-born Israeli businessman, slammed Olmert, saying he was an "egoist" who "misunderstands his job." Gaydamak also asserted that though he doesn't know Hebrew, he's the most popular man in Israel and he might be right.

Gaydamak's latest headline-grabbing move was to pay for the evacuation of 3,000 residents of Sderot, a southern town that has been pounded by Palestinian rockets, to the Red Sea resort of Eilat.

This drew applause from Israelis disappointed with the government's inaction and increasingly enamored of the country's most famous benefactor. But it drew very public criticism from Olmert, who termed the evacuation a "millionaire's promotional trick."

Other politicians also criticized Gaydamak for the move, which they said encouraged Israelis to run away from their homes.

But in the interview Monday, Gaydamak said the criticism was motivated by politicians' fear that he could defeat them in an election if he ran. "They have no basic understanding that they are the people's servants, that they are representatives who are supposed to manage this society," Gaydamak said.

When he was called by a "crying mother from Sderot" begging to be evacuated, Gaidamak said, he felt that "as a Jew, and as a human being" he could not refuse. He has no political aspirations, Gaydamak said he just wants to help.

But many think that the elusive billionaire's motives are murkier, and have charged that Gaydamak, who first came to Israel in 1972, is trying to purchase himself a safe haven.

Gaydamak, a father of three who has homes in Moscow and the upscale Israeli town of Caesarea, has never been convicted of a crime.

But he is under an international arrest warrant because of a French investigation into alleged arms trafficking to Angola in the early 1990s, and in Israel he's been investigated in a money laundering case. He has not been indicted, but police spokesman Micky Rosenfeld said that the case remains open.

"I never did something wrong in my life," Gaydamak said Monday. He said he made all of his money on the Russian stock exchange, calling it the "most dynamic stock exchange in the world."

Gaydamak has repeatedly slammed the police for what he says is political persecution, even taking out an ad in an Israeli paper attacking legal authorities.

In the meantime, he has become an A-list celebrity, holding a star-studded New Year's party, enjoying the spotlight as the owner of one of the country's most famous soccer franchises, Beitar Jerusalem, and as the savior of choice for Israelis in distress and abandoned by a dismally unpopular government, reports AP.

This summer, when nearly 4,000 Hezbollah rockets pummeled northern Israel, it was Gaydamak, not the government, who funded the evacuation of thousands of northerners for an all-expenses-paid beach vacation until the fighting ended. And last week, after a Palestinian rocket killed a woman in Sderot, Gaydamak stepped in again, sending a fleet of buses to take residents to hotels in Eilat.