Nations should step up efforts to combat biological weapons and address the threat posed by terrorist and criminal groups seeking to obtain them, U.N. Secretary-General Kofi Annan said Monday. 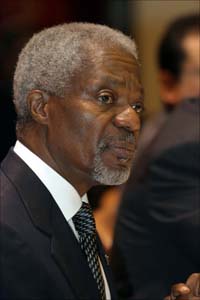 Annan was addressing an international conference, the same one that broke down five years ago when the United States rejected a plan to enforce a global ban as unverifiable.

"The horror of biological weapons is shared by all," he told countries meeting in Geneva to review the 1972 Biological Weapons Convention, which has been ratified by 155 countries.

He said nations must address terrorism and crime "to ensure that peaceful uses of biological science and technology can safely reach their potential."

The convention, which bans the development and stockpiling of germ-based weapons, has never had serious enforcement measures because the threat of biological warfare was believed to be minimal when it was drafted during the height of the Cold War.

Some countries that signed the convention, including the Soviet Union and Iraq, were later found to be developing biological weapons in what appeared to be civilian facilities. Efforts to strengthen the treaty gained speed after concerns that Iraq would use biological weapons during the Gulf War.

But talks were suspended in 2001 after the United States ended attempts to continue negotiating enforcement procedures, saying it wouldn't be able to detect violations and such a program would give away defense and commercial secrets, reports AP.

"Five years ago, in this very room, you faced the dire prospect of stalemate and deadlock," Annan told the conference. "Deep and bitter divisions threatened to bring collective efforts against biological weapons to a permanent halt."

He urged countries to build on what progress they had made since and "take further steps to ensure that the convention will continue to serve as an effective barrier against biological weapons."

Masood Khan, the Pakistani ambassador chairing the session, said last week he did not expect international verification to be a major topic at the conference. Some observers have speculated that Iran or another country might raise the issue to focus attention on Washington's reluctance to allow inspections.