The space shuttle Discovery's seven astronauts flew to Florida on Monday for several days of dress rehearsal in preparation for their Dec. 7 launch on a mission to the international space station. 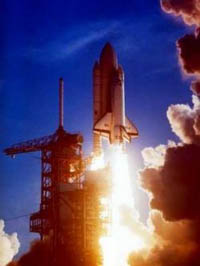 Led by commander Mark Polansky, the astronauts will run through emergency escapes from the launch pad, practice landing on Kennedy Space Center's runway and learn how to put out fires on the shuttle. The dress rehearsal culminates Thursday with the crew donning their spacesuits, strapping into the shuttle and practicing a launch countdown.

"It's a chance for us to get a lot of training and see our vehicle on the pad for the first time," Polansky said after landing at the Kennedy Space Center.

During the 12-day mission, Discovery will rotate out a space station crew member, and its astronauts will rewire the space lab's electrical system.

Meanwhile, NASA managers in New Orleans reviewed a possible design change to the shuttle's external fuel tank and could decide this week to modify the tank for a mission next March. Foam breaking free of the external tank has vexed NASA ever since a piece of foam struck the space shuttle Columbia's wing during liftoff in 2003, causing a gash that allowed fiery gases to penetrate the spacecraft. Seven astronauts were killed.

The space agency has spent three years trying to figure out how to keep foam loss to a minimum, reports AP.

NASA already made one major change to the tank removing 37 pounds (17 kilograms) of foam after a large chunk fell off during the first return-to-flight mission last year. The new design change would likely remove foam from the top three or four of the almost three dozen wedge-shaped brackets along the tank that hold pressurization lines in place.

Next year, NASA plans to change the tank even further by making the brackets with titanium.