Civil rights activists filed a suit Tuesday asking German prosecutors to open a war crimes investigation of former U.S. Secretary of Defense Donald Rumsfeld and a host of other officials for their alleged roles in abuse at Iraq's Abu Ghraib prison and Guantanamo Bay. 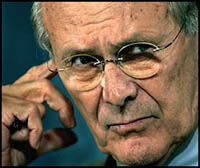 The 220-page suit document was sent to federal prosecutors by U.S. and German attorneys under a German law that allows the prosecution of war crimes regardless of where they were committed. It alleges that Rumsfeld personally ordered and condoned torture.

"One of the goals has been to say a torturer is someone who cannot be given a safe haven," said Michael Ratner, the president of New York's Center for Constitutional Rights, which is behind the litigation.

"It sends a strong message that this is not acceptable."

The suit is brought on behalf of 12 alleged torture victims 11 Iraqis held at Baghdad's Abu Ghraib prison and Mohamad al-Qahtani, a Saudi being held at the U.S. military prison in Guantanamo Bay, Cuba, who has been identified by the U.S. as a would-be participant in the Sept. 11 attacks.

Captured in December 2001 along the Afghanistan-Pakistan border, al-Qahtani would not crack under normal questioning, so Rumsfeld approved harsher methods, according to testimony before U.S. Congress.

After FBI agents raised concerns, military investigators began reviewing the case and in July 2005 said they confirmed abusive and degrading treatment that included forcing al-Qahtani to wear a bra, dance with another man, stand naked in front of women and behave like a dog. Still, the Pentagon determined "no torture occurred."

Although German prosecutors already declined to investigate a more limited suit in 2004, the attorneys involved think they have a better case this time armed with documents from 2005 congressional hearings on the al-Qahtani case. They argue that Rumsfeld's resignation last week means prosecutors may be under less political pressure to shun the case, reports AP.

They also have former U.S. Army Brig. Gen. Janis Karpinski, the one-time commander of all U.S. military prisons in Iraq, as a witness on their behalf.

Pentagon spokeswoman Cynthia Smith and Frank Wallenta, spokesman for German federal prosecutors, both said they could not comment because they had not yet received the suit in their offices.

In addition to Rumsfeld, the suit names U.S. Attorney General Alberto Gonzales, former CIA director George Tenet, former commander of all U.S. forces in Iraq Lt. Gen. Ricardo Sanchez and eight others, alleging that they all either ordered, aided, or failed to prevent war crimes.