Election looks to have little impact on gay marriage vote

Another round in the Massachusetts gay marriage debate began Thursday, as activists both pro and con gathered at the Statehouse before lawmakers decided whether to support or sink a constitutional amendment defining marriage as the union of a man and a woman. 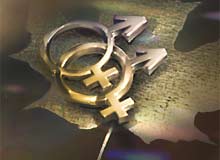 Election looks to have little impact on gay marriage vote

"It's not like we're looking for something extra," said Jeremy Spiegel of Stoughton as he stood on one side of Beacon Street holding a sign that read, "No Discrimination in the Constitution." He added: "Same-sex couple just want the same rights as straight couples."

But across the road, Travis Housman of Lynn had the opposite opinion. He said marriage historically has been between the sexes, not within them, but more fundamentally, he wanted the Legislature to allow state residents to vote on the matter in 2008.

Gay marriage supporters were working to kill the proposed amendment by forcing Thursday's constitutional convention to recess without taking action on the proposal.

"If we lose, we lose, but we want the right to vote on it," Housman said.

The amendment needs the support of just 25 percent of the Legislature, or 50 lawmakers, to move forward. It must then be approved again in the next legislative session to wind up on the November 2008 ballot.

Kris Mineau of the Massachusetts Family Institute, which opposes same-sex marriages, said support for the ballot question remained steady. "All we're asking is that the constitutional process be followed," he said.

The Massachusetts Supreme Judicial Court ruled in November 2003 that the state's constitution guarantees gays and lesbians the right to marry in Massachusetts. Those weddings began in May 2004, and since then, more than 8,000 couples have tied the knot, reports AP.

If voters approve the proposed amendment, all same-sex couples who were married before the law goes into affect would retain their marriage benefits, but no more gay marriages would be permitted.

Some 170,000 residents signed the petition seeking to put the question on the ballot, and some lawmakers say that gives them an obligation to consider it at Thursday's convention.