Japan's Education Ministry has received a second letter believed to be from a student warning of a plan to commit suicide, a ministry official said Thursday, amid growing concerns about whether enough is being done to combat bullying in schools. 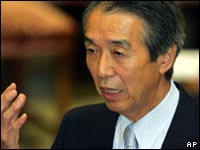 Earlier this week, Education Minister Bunmei Ibuki received a letter from a student who said he had been bullied at school and planned to kill himself on Saturday if the situation did not change by Wednesday.

The ministry received another letter on Thursday warning of a student's suicide plan, ministry official Teruho Nakashima said. He added that officials who could comment further were not immediately available.

Kyodo News agency reported the new letter, believed to be from a high school student, was also addressed to Ibuki. The writer warned that she would kill herself on Saturday, "along with the people who have bullied me," Kyodo said.

The letters follow a recent string of suicides by children who said they had been bullied at school, reports AP.

In early October, an 8th grade boy in southern Japan hanged himself inside a barn, leaving a note saying he could no longer stand bullying at school.

A 14-year-old girl in central Japan hanged herself at home in late October. Japanese media reported she had been bullied by members of the school basketball club.