The US administration has acknowledged the Democrats’ victory at the elections in the lower house of the Congress. George W. Bush is disappointed with the results of the voting, his political advisor, Dan Bartlett said. However, the White House would like to cooperate with the new law-making majority regarding such issues as Iraq, “anti-terrorist war” and economic problems. 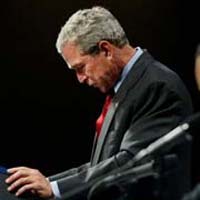 The Democratic victory in the U.S. elections was seen in Asia as a well-deserved rejection of the war in Iraq, but was not expected to have a major impact on American foreign policy.

Few feared the split in government between the two political parties would paralyze the government, but the returns were seen by some as the beginning of the end of President George W. Bush's term in office.

"Although his term will not end within the next year, I think Bush is already turning into a lame duck," Yuzo Yamamoto, 60, the manager of a Tokyo consulting firm, said on Wednesday as the results emerged.

Amid widespread dissatisfaction with Bush, Democrats won control of the House and challenged Republican dominance in the Senate in midterm elections Tuesday. The next presidential election will be in November 2008.

As in the U.S., outside observers saw the bloodshed in Iraq as the major driving force behind the growing popularity of the Democrats.

"Voters have punished the Republicans. They are not happy with the way the leadership has handled the Iraq war," said Chandra Muzaffar, president of the Malaysia-based think-tank, International Movement for a Just World.

"The Republicans lost in the election because the American voters are now fed up and bored with the war," said Vitaya Wisetrat, a prominent, anti-American Muslim cleric in Thailand. "The American people now realize that Bush is the big liar."

The prospect of a sudden change in American foreign policy could be troubling to U.S. allies in Asia - such as Japan and Australia - that have thrown their vocal support behind the U.S.-led invasion of Iraq.

But no major shifts were expected in Iraq, in part because the Democrats have not come ahead with a clear action plan, said Michael McKinley, a political science professor at the Australian National University.

"There would have been some concern in policy making circles here if the Democrats had said, 'We are definitely going to withdraw by Christmas,"' McKinley said. "But they're not able to say that," he said.

"They will have concluded that it is unlikely to have radical significance in the area of U.S. foreign and strategic policy," he added.

U.S. policy on North Korea, which angered the world by testing a nuclear device on Oct. 9, is also high on the agenda in the region. Despite the test, Pyongyang has pledged to return to stalled six-nation talks on its weapons program.

While some in South Korea have speculated that a Democratic victory could erode Bush's hardline approach toward Pyongyang, others were skeptical.

Kim Tae-woo, a North Korea expert at the Seoul-based Korea Institute for Defense Analyses, said Bush was unlikely to make radical changes in his policy in his final two years in office.

"Why should he change his policy line?" Kim asked, referring to Bush. "The Bush administration will feel no need for changes in the six-party talks."

In China, the resurgence of the Democrats raised fears of renewed U.S. concern over human rights and trade and labor issues. China's surging economy has a massive trade surplus with the United States.

"The Democratic Party ... will protect the interests of small and medium American enterprises and labor and that could produce an impact on China-U.S. trade relations," Zhang Guoqing of the state-run Chinese Academy of Social Sciences said in a report on Sina.com, one of China's most popular Internet portals.

In Japan, the shift in favor of the Democrats was expected to complicate its diplomatic approach to the U.S.

For years, the Japanese have been able to successfully woo the Republican White House, knowing that the Republican Congress would largely follow Bush's lead, the AP reports.

Now that calculus would have to change, said Tsuneo Watanabe, senior fellow at Mitsui Global Strategic Studies Institute in Tokyo.

"Now it's time for the Japanese, the embassy in Washington, to spend more time on Congress," he said.