First lady Laura Bush cautioned Wednesday that Americans discussing the war in Iraq especially politicians should be careful what they say because other countries are paying attention. 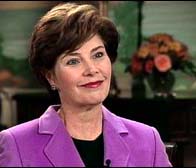 "The right to have these conversations is part of what makes our country great and our democracy strong. We must be mindful that people around the world are listening to these discussions," Laura Bush said at a suburban Columbus recreation center during a campaign appearance with Republican Rep. Deborah Pryce, reports AP.

"Responsible candidates understand that the men and women of our military are risking their lives for us, and that we must conduct our debate here at home in a way that does not jeopardize our troops in harm's way," she said, calling for "conversations conducted with civility and respect."

Bush did not mention her husband's 2004 election opponent, Sen. John Kerry, but her comments came on the day the Democrat apologized for telling a group of California students that individuals who do not study hard and do their homework would likely "get stuck in Iraq."

Aides said the senator had mistakenly dropped one word from his prepared remarks, which was originally written to say "you end up getting us stuck in a war in Iraq." In that context, they said, it was clear Kerry was referring to Bush, not to the troops.

Pryce is in a close fight for her Ohio seat against Democrat Mary Jo Kilroy.