Aides to Gov. Arnold Schwarzenegger can no longer accept gifts from people doing business with the state under new office rules aimed at minimizing any appearance of conflicts of interest. 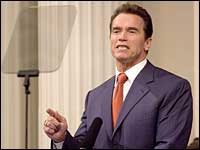 The policy, reported Tuesday by the Los Angeles Times, is stricter than state law and represents an about-face for the California governor, who in past years has taken a permissive approach to gifts.

State lobbying reports show Schwarzenegger aides had accepted free tickets to Disneyland, Rolling Stones concerts and sporting events, among other things, in the past year.

Chief of staff Susan Kennedy wrote to aides in August that by taking such gifts, even if allowed under the law, staff members could create a public perception that they have been compromised.

"When in doubt ... pay for the item yourself," Kennedy wrote.

Schwarzenegger's legal counsel, Andrea Hoch, wrote a separate letter saying aides could not attend the governor's campaign fundraising events unless they paid for their food and drink. The Republican governor is up for re-election this fall.

Adam Mendelsohn, Schwarzenegger's communications director, said the changes were put in place because the administration had added staff. "Often with new staff members, and new leadership, you'll find changes and important additional steps that were not put in place originally," he said.

State law allows public officials to accept gifts worth up to $360 (Ђ283) a year from any one source.

Under Schwarzenegger's new policy, aides cannot take tickets, meals, entertainment or loans from anyone doing business with the state, or any group lobbying for passage or defeat of legislation. Previous governors have had similar policies.

Kennedy is scheduled to go to South America next month for a 12-day trip with other state officials sponsored by the California Foundation on the Environment and the Economy, a tax-exempt group financed partly by energy companies and other businesses that lobby in Sacramento. Mendelsohn said the trip does not violate the gift policy because Kennedy will deliver a speech as the governor's representative.

"We want state delegations going on fact-finding trips if warranted," said Sheila Krumholz, acting executive director of the Center for Responsive Politics in Washington, D.C. "We just have to make sure they aren't being unduly influenced by such lavish trips, and that policy is not being skewed as a result."

Mendelsohn said there are no penalties for failing to comply, though he said the governor was committed to enforcing the policy.