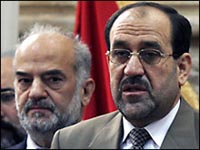 The killers escaped in a car after gunning down Essam al-Rawi, head of the University Professor's Union and a senior member of the influential Association of Muslim Scholars, according to police Lt. Maitham Abdul-Razaq.

The Muslim Scholars Association is a hardline Sunni organization believed to have links to the insurgency raging against U.S. forces and their Iraqi allies. The group has boycotted elections and stood aside from the political process.

Al-Rawi played a "vital role in protecting the universities' independence by distancing them from all kinds of conflicts," al-Maliki said in a statement issued by his office.

An association official confirmed the killing of al-Rawi, saying the respected geologist was behind the wheel of his car and had just left his home for the drive to work at Baghdad University accompanied by two bodyguards.

The gunmen drove in front of al-Rawi's car, forced it to stop, then sprayed it with automatic weapons fire, said the official, who spoke on condition of anonymity because he feared reprisal. One of al-Rawi's bodyguards was killed and the other injured, the official said.

The association was independently investigating the killing and would issue a statement later, the official said, reports AP.

Although al-Rawi was likely targeted because of his political views, Iraqi academics have increasingly fallen victim to the country's religious extremists and other violent groups.