Second-highest Republican in US House testifies in e-mail case

Investigators looking into an ex-congressman's come-ons to teenage male assistants will have to resolve major conflicts in what the top two House Republicans have said they knew about the matter and when they learned it. 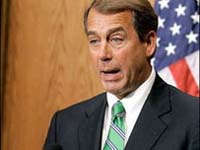 Second-highest Republican in US House testifies in e-mail case

House Majority Leader John Boehner, who spoke to the House ethics committee in closed session Thursday, said he was not backing down from previous statements in which he said he told House Speaker Dennis Hastert months ago about questionable e-mails Republican Congressman Mark Foley sent to a former assistant from Louisiana.

Hastert, the leader of the House of Representatives, says he learned of the e-mails on Sept. 29, the day Foley resigned his seat.

"I made myself clear on the record for the last three weeks, and I told the ethics committee today the same thing that I've told many of you," Boehner, a Republican who has the House's second-highest post, told reporters after his testimony.

Hastert has said he doesn't remember the conversation with Boehner, or a second warning about Foley that Republican Congressman Tom Reynolds has said he also gave the speaker earlier this year, reports AP.

The ethics committee has yet to hear from Hastert and his top aides, who have their own conflicting stories about when they learned about Foley. The Foley case could affect not just Hastert's future but the prospects for control of the House when voters cast ballots in the Nov. 7 congressional elections.

Republicans are working to hold onto their majority in both chambers of Congress. Democrats could get a majority in the House with 15 more seats; in the Senate, they would need six. All 435 House seats are up for a vote, and 33 of the 100 Senate seats are on the ballot.

House investigators have heard from most of the other key players in the Foley matter. The committee was not expected to question witnesses Friday.