The European Union said Tuesday it would allocate Ђ28.3 million (US$35.4 million) to fund 17 research projects into bird and pandemic flus. 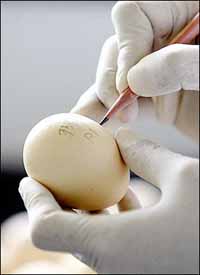 The projects will focus on developing better testing and vaccines for flu viruses. It will also seek to implement early warning systems and technology-sharing between the EU and partner states Russia, China, Vietnam, Australia, Canada, Croatia and the United States.

"It is important that the EU is able to target its research program to meet new needs that arise," European Science Commissioner Janez Potocnik said in a released statement.

"We have shown that we are able to do this. The involvement of so many international partners shows that Europe is leading the global fight against avian and pandemic flu," the statement said, reports AP.

The Commission said the funds would be used for both human and animal health research projects.

The World Health Organization estimates 251 people have been infected with bird flu since 2003, of which 148 have died.