Frightened and unable to sleep in her posh, ocean-view hotel room after riding out the island's most recent earthquake, Doris Christianson crept out of bed and found a decidedly more down-market place to lay her head. 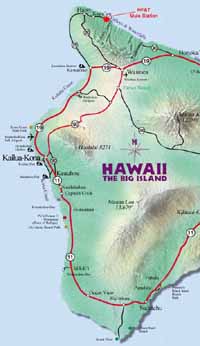 Christianson said she was still "spooked" from Sunday's 6.7-magnitude earthquake, the strongest temblor to hit the islands in more than two decades.

Living in Arroyo Grande, California, the Christiansons are no strangers to earthquakes. But this one was different.

"It was so loud. So violent. I thought the whole hotel was going down," she said. "It just went on and on and on. I just thought, 'This is it."'

For the rest of the tourists and residents in Hawaii, life quickly returned to normal Monday as authorities restored electricity, cleared highways and found little major damage.

Tourists continued to arrive by the planeload, and most who were momentarily shaken by the quake saw no need to cut short vacations.

"As long as the airports are open, we're OK," said Dave Kenny of Ortonville, Michigan, who was with his wife at Volcanoes National Park when the quake struck.

"We figured it was a show that Hawaii put on just for us," Kenny said.

Even hard-hit Kona Community Hospital, that had to be evacuated after ceiling tiles fell, was declared structurally sound, said spokeswoman Emily Mendez-Bryant.

Thirty long-term care patients were taken to a hotel, and six were airlifted across the island to another hospital as a precaution. The patients were to be returned by the end of the week, reports AP.

"God was on our side," said Donald Lewis, president and chief executive of the hospital. "It's not as bad as it could've been."

Restaurants and stores in Kona-Kailua cleaned up and were filled with tourists. Horses grazed on the golden grass in Waimea. Bicyclists, training for Saturday's Ironman Triathlon World Championship, zipped along Queen Kaahumanu Highway.