Late Argentine strongman Peron to be reburied in new mausoleum

Late strongman Juan Domingo Peron, who dominated Argentine politics like no other 20th-century leader with the glamorous Evita at his side, is to be buried Tuesday for a third time since his death in 1974. 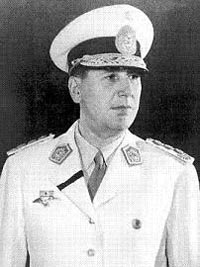 Late Argentine strongman Peron to be reburied in new mausoleum

Peron's body will be escorted by motorcade to a union hall for a midday tribute, then taken to a new US$1.1 million (Ђ880,000 million) mausoleum in the cattle-ranching countryside, where supporters hope one day the embalmed body of his famous first lady might one day rest beside him.

Relatives of the late Eva Peron, or Evita, have opposed moving her remains from the tomb in Buenos Aires' downtown Recoleta cemetery, after a bizarre drama in which her remains made two trans-Atlantic crossings since her death from cancer in 1952 at age 33.

As Argentina's power couple, the Perons cultivated an enormous working-class following by redirecting agricultural wealth to legions of urban poor through projects to build schools, hospitals and homes. Peron was elected president three times and died in office on July 1, 1974, at the age of 78.

President Nestor Kirchner and other members of the ruling Peronist party are expected to take part in Tuesday's ceremonies. But the movement that bears Peron's name has suffered deep fissures over how best to advance his political legacy, and prominent intra-party rivals to Kirchner such as former presidents Carlos Menem and Eduardo Duhalde were expected to skip the proceedings.

Thirty-two years after Peron's death, supporters say he deserves a resting place befitting a national hero, instead of his current home in the crowded Chacarita cemetery where his hands were amputated and stolen by grave robbers in 1987.

Workers on Monday tore a hole in the side of Peron's crypt and removed the heavy metal coffin horizontally to avoid damaging his desiccated, formaldehyde-injected body, said Alejandro Rodriguez Peron, nephew of the late caudillo. The remains were being transferred to a new coffin.

Peron will be reburied at his former "Oct. 17" weekend estate in San Vicente, 30 miles (45 kilometers) southwest of Buenos Aires, in a marble sarcophagus set in a lofty, modern atrium. Outside a window, a towering eucalyptus tree will stand guard over his body.

The estate is named after the date in 1945 when Peron then-vice president and secretary of war was released after opponents in the military threw him in jail on accusations of conspiring against a previous government. Trade unionists and other supporters launched massive protests to help win his freedom after eight days, and Peron went on to win the first of three elections in February 1946.

An authoritarian leader who also had his enemies, Peron radically reshaped Argentina's economic and political life by nationalizing railroads, utilities and other industries to bankroll state programs for the poor and working classes.

The young, blond Evita became a national icon, and after her death her body lay in state in Congress for weeks as hundreds of thousands of mourners thronged to her coffin's open viewing.

When military leaders overthrew Juan Peron in 1955, they were apparently so worried about a death cult that they secretly moved Evita's body to an unmarked grave in Italy. In 1971 it was delivered to Juan Peron's home in exile in Spain.

Peron returned to Argentina soon after and ruled briefly until his death. He was succeeded by his third wife, Isabel, who brought Evita's body to rest by his in the presidential residence in Buenos Aires. But after she too was ousted in a 1976 coup, the military quietly dispatched both bodies to their families' respective crypts.

Controversy continues to surround Juan Peron more than three decades after his death, as his remains were subjected on Friday to DNA sampling in a patrimony case.

Martha Holgado, 72, who says she was fathered by him during an affair in the mid-1930s, told The Associated Press she is certain the tests will prove she is Peron's daughter.

Peron never publicly acknowledged her as a daughter, and critics have long scoffed at her claims.

Funeral director Dr. Ricardo Peculo, who examined Peron's remains last week, said the body was well preserved for a three-decade-old corpse and would not require any "reconstruction" before Tuesday's events.