A crocodile farm owner rushed Monday to relocate more than a thousand of his large water-loving reptiles many of them 2 to 3 meters (7-10 feet) long to prevent them from escaping in rising flood waters north of Bangkok. 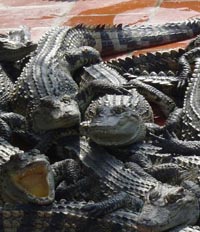 With monsoon rains continuing to flood several central provinces, Amorn Chittipinitmak has evacuated several hundred of his flesh-eating animals and is working to transfer up to 500 more from his farm in Uthai Thani province to another farm on higher ground.

"I'm scared they're going to escape. When the current is very strong, the water level rises very fast on the first day, it rose 50 centimeters (20 inches)," Amorn said by telephone. "In just a brief moment, water was everywhere."

Monsoon rains flood parts of Thailand every year, starting in the north and northeast before shifting south and ending usually in late-October. There are often reports during the flood season of farm-raised crocodiles that escape and wander through swelling rivers and inundated villages.

"I have built 3.2-meter- (10-foot-) high tanks for them (the alligators), from the ground up, using concrete blocks, but enormous amounts of water are pouring in," Amorn said. "The water has flooded over a meter (yard) already. I'm scared the water is going to rise even higher."

Getting the crocodiles to his other farm in the Sakae Krang sub-district of Uthai Thani involves removing them from their tanks, placing them in boats to navigate the floods, and transferring them by car to another farm, Amorn said, adding he had hired a few dozen men from neighboring crocodile farms to help out, reports AP.

Intermittent flooding since late August has left 56 people dead across the country, the National Disaster Prevention and Mitigation Center said.