20:56
Russia and China may form military alliance to counter Wester aggression
17:26
Russia confirms explosions near military airfield in Crimea
16:54
Russian Foreign Ministry lashes Estonia for its call to ban Russians from Europe
16:05
Explosions in Crimea in the area of military airfield
14:35
Instead of new arms, Washington presents Zelensky with 'black spot'
12:48
Le Figaro: Putin has a time bomb that will trigger major recession in euro zone
12:25
Not too much time is left for Ukrainian economy to collapse
21:31
Ukrainian army about to break down completely
21:08
USA will dump Ukraine for Taiwan

Adam Yehiye Gadahn, 28 who is believed to be in or near Pakistan could be sentenced to death if convicted of the charge. He also was indicted Wednesday on a charge of providing material support to terrorists. 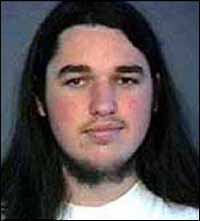 Treason has only been brought a few dozen times in U.S. history and not at all since the World War II era.

Gadahn "knowingly adhered to an enemy of the United States, namely, al-Qaida, and gave al-Qaida aid and comfort ... with intent to betray the United States," according to the indictment, handed up by an Orange County grand jury. Gadahn is from southern California.

The suspected al-Qaida operative has been sought by the FBI since 2004. Based on the indictment, the FBI added Gadahn to its list of most wanted terrorists, and the State Department offered a $1 million (Ђ800,000) reward for information leading to his capture.

"The charge of treason is exceptionally severe and it is not one that we bring lightly," Deputy Attorney General Paul McNulty told reporters in Washington. "But this is the right case for this charge."

Treason "is not a crime only against the American people, but against America itself," McNulty said.

Gadahn is suspected of having attended al-Qaida's training camps in Pakistan and serving as one of its translators. He has become known by his nom de guerre, Azzam al-Amriki, or "Azzam the American."

Appearing last month in a 48-minute video along with al-Qaida's No. 2 leader, Ayman al-Zawahri, Gadahn called on his countrymen to convert to Islam and for U.S. soldiers to switch sides in the Iraq and Afghan wars.

It was the second time he appeared in the same video with al-Zawahri. In a July 7 clip marking the one-year anniversary of the terror attack on London commuters, Gadahn appeared briefly, saying no Muslim should "shed tears" for Westerners killed by al-Qaida attacks.

Beyond that, authorities believe he is the masked figure who appeared in two previous videos from al-Qaida, one given to ABC television in 2004 and another a few days before the fourth anniversary of the Sept. 11 attacks, reports AP.

According to the indictment, Gadahn announced in the 2004 video that he had joined al-Qaida, "a movement waging war on America and killing large numbers of Americans."

"Fighting and defeating America is our first priority," he said, according to the indictment. "... The streets of America shall run red with blood."

In a 2005 video, he referred to terrorist attacks in Europe and threatened more against the United States.