Schwarzenegger, on US TV talk show, points to Iraq "mistakes"

Gov. Arnold Schwarzenegger traded quips with Jay Leno one moment and criticized U.S. foreign policy the next during an appearance on the "Tonight Show" that veered from lighthearted to serious and had the governor's opponents crying foul because his rival in next month's election was not included. 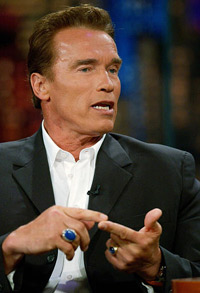 Schwarzenegger, on US TV talk show, points to Iraq "mistakes"

When asked by Leno about television campaign ads attempting to link Schwarzenegger to President George W. Bush, the star of the "Terminator" films mocked the notion.

"To link me to George Bush is like linking me to an Oscar," said the governor, who has never won nor even been nominated for acting's most prestigious award.

On a more serious subject, the Republican governor said Wednesday a "lot of mistakes" were made during the war in Iraq, but ducked a question from Leno about whether Defense Secretary Donald H. Rumsfeld should be fired.

"Without any doubt, we have to find an exit strategy as quickly as possible," he said.

The remarks represented Schwarzenegger's most pointed criticism to date of the Bush administration over its Iraq policy. He has previously said he supports the war, but that the U.S. should find a "sensible" way to get out.

His appearance on "The Tonight Show" riled supporters of his Democratic opponent, state Treasurer Phil Angelides, whose campaign said he wants equal time.

A few dozen Angelides supporters staged a noisy protest outside the NBC studios where "The Tonight Show" is taped, chanting "Hey, hey, ho, ho, Schwarzenegger's got to go."

Angelides campaign manager Cathy Calfo said she sent a letter Wednesday to 11 NBC affiliates in California asking them to give equal time to the state treasurer because "The Tonight Show" has not invited him onto the program.

NBC spokeswoman Tracy St. Pierre said "The Tonight Show" never received a letter Angelides' camp said it sent requesting he be included, but the state treasurer's spokesman, Steve Maviglio, provided a copy of the letter he said the campaign faxed on Tuesday, along with a UPS shipping receipt to have the letter sent overnight and delivered by early Wednesday morning.

Federal rules require broadcast stations to give equal time to candidates who appear on the air, although the rules do not apply to news programs, interview shows and documentaries in which the candidate is not the sole focus.

"Anyone that has any knowledge of it or has tried to cover it up should go absolutely should go," he said, reports AP.

Schwarzenegger has been a frequent guest on Leno's show over the years, and it was on the Aug. 6, 2003, episode that he announced he would run to replace then-Gov. Gray Davis in that year's recall election. The announcement startled even some of Schwarzenegger's advisers, who had predicted one of the most popular action stars of all time would not abandon acting for politics.

As this appearance ended, Leno wished his guest well.