Hundreds of students in the Pacific coast city of Vladivostok protested Thursday over the nuclear test neighboring North Korea claimed it conducted earlier this week, expressing concern about radiation risks. 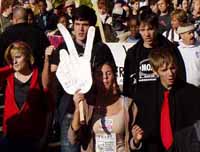 Some 600 to 1,000 students gathered outside a university in the city of 615,000 about 100 kilometers (60 miles) from the short border between Russia's Primorye region and North Korea, Russian media reported.

Demonstrators held signs with slogans including "The blast in Korea is a blow to Primorye" and "We don't want to be mutants," the RIA-Novosti news agency reported. A protest leader, Zakhar Skorokhodov, urged ralliers to sign an appeal for students worldwide to oppose nuclear tests.

Defense Minister Sergei Ivanov has said Russia is certain the blast Monday was a nuclear explosion and that it had the force of 5 to 15 kilotons of TNT, far greater than some Western and Asian estimates of less than one kiloton.

Russian media have reported that the explosion occurred about 150 kilometers (95 miles) from the border, reports AP.

Ivanov and other officials have said abnormal radiation levels have not been detected in the region.

President Vladimir Putin has repeatedly condemned the reported test but stressed that tension over the blast and North Korea's nuclear program must be resolved through diplomatic means, and Russian officials have not publicly indicated what kind of sanctions they might be willing to consider.