The world's 15th-largest rough diamond about the size of a golf ball and dubbed the "Lesotho Promise" was bought by a South African diamond cutting company Monday for US$12.36 million (Ђ9.76 million) at the end of a five-day silent bid competition. 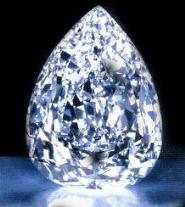 "We called the diamond the 'Lesotho Promise.' We promise you more of the same and better in the future," Khaketla told reporters. Safdico is the manufacturing arm of famous British gem maker and seller Graff Jewelers.

The company said it would cut and polish the very clear gem at its Antwerp factory after carefully studying the rock's fissures and cracks to ensure it finishes off the product the best way possible.

Experts have already graded the Promise with a "class D" status, meaning it is of the clearest quality, with no color blemishes.

Safdico said it aims to produce a large rock, above 60 carats from the rough diamond and smaller polished stones, aiming to resell them for above US$20 million.

The Lesotho Promise was found in August at the famous Letsing mine, where in 1967 a 601-carat stone was discovered and was named the Lesotho Brown because of its color.

Gem Diamonds CEO Clifford Elphick said there were three other "very serious bidders" quite close to winning the final bid for the giant gem, but he refused to divulge who they were, reports AP.