Spanish riot police fought pitched battles Tuesday with a rock-throwing mob that wanted to lynch a man accused of killing a 7-year-old girl by slashing her throat, authorities said. 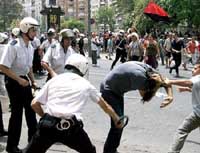 The clashes erupted shortly after midnight in Ceuta, a tiny Spanish enclave on the northern coast of Morocco, as about 50 friends and relatives of the girl's family gathered at the border upon learning the suspect hiding out in Morocco had turned himself in and would be brought back into Ceuta, the Interior Ministry office there said.

Police accompanying the suspect, described in news reports as a former boyfriend of the girl's mother initially fired warning shots into the air "to keep the detainee from being lynched," the office said in a written statement.

The girl has been identified only by her first name, Suhaila. She was killed Saturday while locked in her house alone. The mother had gone out to shop for food for the Muslim fasting month Ramadan, reports AP.

Neighbors in the border-area shantytown where the girl lived said she hung a sheet out of a first-story window to let the man in, Spanish news reports say. The man was later seen climbing back out of the window and leaving bloodstains on the sheet.