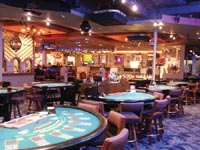 A gang of robbers wielding machine guns and sledgehammers stole an estimated Ђ1.5 million (US$1.9 million) from a casino's security van after ramming the vehicle with a stolen truck, police said.

The robbery occurred at the foot of Mt. Parnitha, near a casino about 20 kilometers (12.5 miles) north of Athens.

Police said a stolen truck had been used to ram the van, adding that robbers escaped in a car, also believed to be stolen, reports AP.

The robbers smashed the van's bulletproof windshield and trained automatic weapons on the driver and security guard, who did not resist the attack, police said.