US researchers aim to design a prosthetic tail for injured dolphin

The news from Indian River Lagoon was too familiar: another dolphin gravely injured because of human action. 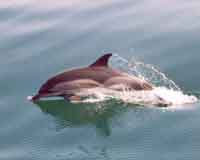 US researchers aim to design a prosthetic tail for injured dolphin

But marine scientist Steve McCulloch immediately saw this rescue was unique. The baby bottlenose dolphin lost her tail, but perhaps her life could be saved.

McCulloch, director of dolphin and whale research at the Harbor Branch Oceanographic Institution, decided to channel his anger into a solution.

The solution for the dolphin dubbed Winter may be a prosthetic tail. If the logistics can be worked out, Winter's prosthesis would be the first for a dolphin who lost its tail and the key joint that allows it to move in powerful up and down strokes.

"There's never been a dolphin like her," said Dana Zucker, chief operating officer of the Clearwater Marine Aquarium, which is now Winter's home.

A dolphin in Japan has a prosthesis, the first in the world, to replace a missing part of its tail.

Winter was a frail, dehydrated 3-month-old when she came to the animal rescue center in December. A fisherman found her tangled in the buoy line of a crab trap in Indian River Lagoon near Cape Canaveral. The line tightened around her tail as she tried to swim away, strangling the blood supply to her tail flukes.

"It looked like paper," Zucker said of Winter's tail. "Bit by bit over the weeks it just fell off."

Winter was left with a rounded stump, reports AP.

A team of more than 150 volunteers and veterinarians spent months nursing Winter back to health. Zucker and her family cuddled with Winter and fed her a special mix of infant formula and pureed fish in the aquarium's rescue pool.

Winter learned how to swim without her tail, amazing her handlers with a combination of moves that resemble an alligator's undulations and a shark's side-to-side tail swipes. She uses her flippers, normally employed for steering and braking, to get moving.