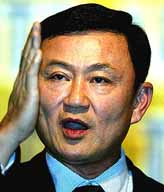 An announcement on national television, signed by Army Commander-in-Chief Gen. Sondhi Boonyaratkalin, said martial law had been declared across Thailand and the Constitution revoked. He ordered all troops to report to their duty stations and not leave without permission from their commanders.

The announcement declared that a "Council of Administrative Reform" with King Bhumibol Adulyadej as head of state had seized power in Bangkok and nearby provinces without any resistance.

"The armed forces commander and the national police commander have successfully taken over Bangkok and the surrounding area in order to maintain peace and order. There has been no struggle," the announcement said. "We ask for the cooperation of the public and ask your pardon for the inconvenience."

The coup apparently bloodless was the first overt military intervention in the Thai political scene since 1992 when an attempt by Prime Minister Suchinda Kraprayoon, a military general, to retain power was countered by mass street demonstrations and Suchinda's ouster.

After the incident, the military vowed to remain in the barracks in contrast to earlier decades when military coups were a staple of Thai politics.

An army general, speaking on condition of anonymity because of the sensitivity of the situation, said Army Commander-in-Chief Gen. Sondhi Boonyaratkalin had used the military to take over power from the prime minister. The general said troops were moved from the western province of Kanchanaburi to stage the coup.

Sondhi, a Muslim in this Buddhist-dominated country, is known to be close to Thailand's revered constitutional monarch, reports AP.

"The government is no longer administering the country," he said.

"I think Thaksin will not return to Thailand for the time being," he said, without elaborating what would happen if Thaksin returned.