A year after Georgia forced restaurants to extinguish their smoking sections, the sign outside Chuck and Kay Fordham's diner defiantly invites customers to "Bring Your Butts On In." 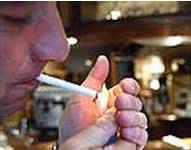 Inside, ceiling fans stir the smell of frying bacon and hash browns and clouds of blue cigarette smoke as patrons puff away over cups of coffee. Butts pile up in the ashtrays on the tables and lunch counter.

Folks who don't want a side order of secondhand smoke with their eggs and burgers should probably stay away from the Smoker's Cafe.

The Fordhams found a way around the smoking ban by exploiting a loophole that was created to exempt bars from the law. Instead of banning cigarettes, the couple banned children from their restaurant.

"The biggest thing with me was the government telling you that you can't do this," Chuck Fordham said. "Most smokers, after they eat, want a cigarette. And to get up from the table to smoke, it's just a pain."

As more states and municipalities stamp out smoking in public places, businesses that cater to tobacco lovers are finding ways to allow smokers to keep lighting up, reports AP.

"We hear about it all the time," said Gary Nolan, spokesman for The Smoker's Club, a smokers' advocacy group. "In many cases they're disobeying it and in other cases they are finding loopholes."

In Little Rock, Arkansas, Pizza D'Action and the Legends Sports Bar and Grill also decided smokers were more profitable than any customers under 21, who have been turned away from both places since Arkansas' smoking ban began in July. Managers at both eateries said the decision was easy, because few customers brought in children anyway.