President George W. Bush on Wednesday acknowledged the existence of previously secret CIA prisons around the world where key terrorist suspects have been held and questioned. 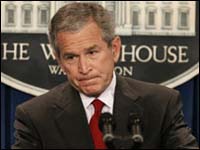 He said the "small number" of detainees that fall into this category include people responsible for the Sept. 11, 2001, terrorist attacks, the bombing of the warship USS Cole in 2000 in Yemen and the 1998 attacks on U.S. embassies in Kenya and Tanzania.

"The most important source of information on where the terrorists are hiding and what they are planning is the terrorists themselves," Bush said in a White House speech with families of those killed in the Sept. 11, 2001, attacks making up part of the audience. "It has been necessary to move these individuals to an environment where they can be held in secret, questioned by experts and, when appropriate, prosecuted for terrorist acts," reports AP.

According to Scotsman, the United States has moved 14 key terrorism suspects held in secret CIA prisons to military control, while the Pentagon banned a series of what it called abusive interrogation tactics for all detainees, officials said on Wednesday.

President George W. Bush was to announce these 14 suspects were transferred to Pentagon control for prosecution at the U.S. naval base at Guantanamo Bay, Cuba, where the military already holds roughly 445 prisoners, a Bush administration official said.

Bush prefaced the announcement of the transfer by describing in unprecedented detail the results of CIA interrogations of Mohammed and other al-Qaeda operatives. He strongly defended the interrogations, which he described as "tough" but fully legal, saying they had helped to head off new plots and thus had saved lives in the United States and other countries.

The Bush proposal for new legislation on military tribunals came a little more than two months after the Supreme Court struck down the military commissions established by the administration to try detainees at Guantanamo. The court ruled 5-3 on June 29 that the special military tribunals, outlined by Bush in a Nov. 13, 2001, military order, were not authorized by Congress and violated the standards of U.S. military justice and the Geneva Conventions, informs Washington Post .