1,500 families displaced due to fighting in Kandahar

Approximately 1,500 Afghan families have been forced to flee their homes because of the bitter fighting in southern Kandahar province, a tribal elder said Wednesday, amid renewed clashes between NATO forces and Taliban fighters and reports of more militant casualties. 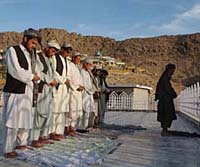 1,500 families displaced due to fighting in Kandahar

According to the witness reports between 100 and 150 the families are living in roadside tents after having been displaced from the Panjwayi and Zhari districts, where NATO and Afghan forces launched a major anti-Taliban offensive over the weekend that they claim has killed more than 250 militants, AP reports.

Musafar, an elder from the Alakozai tribe, said he had requested help from the provincial government and the U.N. to help the displaced civilians, who started evacuating their homes amid growing insecurity about a month ago.

Most are believed living with relatives in other villages or in nearby Kandahar city but Musafar said those living in tents were in "big trouble" and needed food, drinking water and medicine.

Mohammed Nadir Farhad, a spokesman in Kabul for the U.N. High Commissioner for Refugees, said the agency was aware that some Afghans had been displaced, but it didn't know how many and was unable to reach them because of the security situation.

Maj. Quentis Innis, a NATO spokesman, said there had been no reports of clashes in Panjwayi in the past 24 hours, but NATO forces, with air support, had fought militants in Arghandab district to the north, and believed they had inflicted casualties on the Taliban. It was unclear how many.

The fighting in Panjwayi, that began on Saturday, is some of the most intense since the ouster of the Islamist regime in late 2001 by U.S.-led forces, and comes amid an upsurge in violence in recent months.

A Taliban commander has strongly disputed the NATO casualty claims that have not been independently confirmed because of the difficulties of reaching the area.

A hospital in Kandahar has confirmed at least two civilian deaths and 13 wounded in the fighting.

A Panjwayi district council member, Agha Lalai, on Tuesday said bombings by NATO warplanes have killed 21 civilians over the past three days in an area called Zungawad.

Another NATO spokesman Maj. Scott Lundy said he had no immediate details to support Lalai's claims. He said NATO had given repeated warning to civilians to leave the area before the offensive began in Panjwayi, and that there were not believed to be any civilians in the targeted locations.