An Italian prosecutor said Tuesday he will not accept a request by a grandson of Italian wartime dictator Benito Mussolini to exhume the Fascist leader's body, the Italian news agency ANSA said. 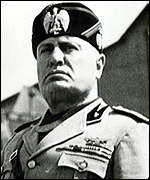 "It can't be processed," Alessandro Maria Lodolini was quoted as saying of the request.

Lodolini said however he was legally obliged to consider the request and that he would make a formal decision when he comes back from summer vacation in mid-September, ANSA reported.

Mussolini and his mistress, Claretta Petacci, were shot by partisans on April 28, 1945, as they were trying to flee Italy. Their bodies were hanged for display the next day in Milan.

However, the details of the dictator's demise are often a matter of debate in Italy. According to an account by Urbano Lazzaro, the resistance fighter credited with arresting Mussolini, the dictator was killed by mistake during an escape attempt.

Mussolini is buried in Predappio, a northern Italian town where he was born in 1883.