More than 10,000 protesters, chanting slogans against sending Turkish soldiers to Lebanon, gathered Tuesday in Ankara as Turkey's parliament was set to vote on a government-backed proposal to send peacekeeping troops to the Middle East, AP reports. 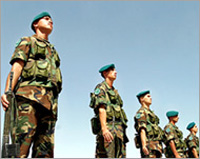 Hundreds of riot police were deployed to stop the protesters from marching toward the parliament building.

A handful protesters climbed on top of a police armored personnel carrier and briefly waved a Lebanese flag, before the crowd staged a sit-in. Police used loudspeakers to urge the crowd to disperse.

Earlier Tuesday, a group of about 50 women from a village near the western city of Manisa yelled anti-government slogans and accused the leadership of sacrificing their children for a cause that has little popular support in Turkey.

About a kilometer (half mile) away, police detained a group of seven youths, some dressed in school uniforms, who attempted to block traffic at a busy intersection in protest of the government's plans.

"We won't become America's soldiers," the group shouted before being taken away.