Andre Agassi received another anti-inflammatory injection on Saturday and got an extra day to rest before playing in the third round of the U.S. Open, his match postponed because of intermittent rain. 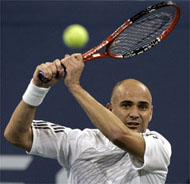 "I'll be all right. I don't need sympathy. I'll be OK," Agassi said with a smile as he walked toward an exit, his racket bag slung over a shoulder.

With no competition on any court as of 4 p.m. (2000 GMT), Agassi's match against German qualifier Benjamin Becker slated to be third in Arthur Ashe Stadium on Saturday was rescheduled for 11 a.m. (1500 GMT) on Sunday.

The 36-year-old Agassi, playing in the final tournament of his career and fighting a bad back, has been on court for more than seven hours already, including his five-set thriller against eighth-seeded Marcos Baghdatis that began on Thursday night and finished in the wee hours of Friday.

"I prefer not to have a drama-filled one tomorrow," Agassi said, reports AP.