Cinese blind activist was arrested after he complained about the forced abortions and others abuses in the provinces of China. His supporters claim that the charges were fabricated, AP repotrs. 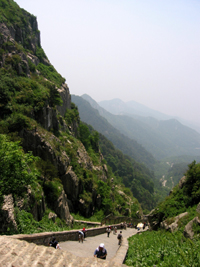 Chen Guangcheng was convicted of damaging property and "organizing a mob to disturb traffic" after a trial in the eastern province of Shandong, the official Xinhua News Agency said.

Chen's supporters say local officials fabricated the charges against him in retaliation for his activism.

"I am outraged by the sentence," said Li Fangping, a member of a team of volunteer defense lawyers for Chen. "The whole justice system has acted totally illegally in Chen Guangcheng's case."

Chen was put on trial last week without his lawyers present after police detained three members of the defense team on theft charges and refused to let them see evidence against him.

The U.S. State Department criticized the lawyers' detention, saying it raised questions about China's commitment to the rule of law.

Chen, who was blinded by a fever in infancy, taught himself law in order to fight discrimination against himself and handicapped farmers in his home province of Shandong.

He was arrested after recording complaints by villagers who said they were forced to undergo abortions and sterilizations to meet birth limits under Chinese regulations that limit most urban couples to one child and most in the countryside to two.

Such practices are illegal, but local officials often resort to drastic measures for fear of being punished for exceeding birth quotas.

Chen's efforts to record the complaints prompted China's family planning agency to investigate. It confirmed the claims and said some officials were detained or fired.

Since last August, Chen and members of his family have been beaten, threatened and confined to their house by thugs. His wife, Yuan Weijing, says the men were hired by local officials.

Chen's legal team included some of China's most prominent activist lawyers and a leading law professor from Beijing.