In two seperate accidents in India 33 people were left dead. In western part of the country a truck overturned and fell into a deep ditch, while in the North a crowded bus plunged off a steep mountain road, AP reports. 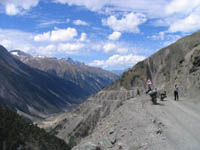 Seventeen people were killed when a truck overturned and crashed into a deep ditch in western India, Press Trust of India news agency said.

Victims were sitting on top of sacks of salt that the truck was transporting when it overturned into the ditch which was flooded from recent monsoon rains, PTI said.

In another accident, in Indian-controlled Kashmir, a crowded bus swerved off a steep mountain road and plunged into a gorge, killing at least 16 people and injuring 35 others.

The driver of the bus appeared to lose control of the bus as he negotiated a sharp bend in the road and the bus hurtled at least 250 meters (275 yards) down into a gorge, PTI said quoting unnamed police officials.

The accident occurred near Sainganji, a village around 190 kilometers (120 miles) northwest of Jammu, the winter capital of India's Jammu-Kashmir state.

Villagers and local police used ropes to reach the bus and help pull out survivors.

At least nine people died instantly, while the others died while they were being taken to a hospital in the nearby town of Rajouri.

Road accidents claim thousands of lives every year in India, and most are blamed on reckless driving, aging vehicles and poor roads. Many passenger buses in far-flung areas are rickety and poorly maintained, and are often overcrowded.