Energy-starved India in search of a way to meet its growing fuel needs is pushing the cultivation of jatropha, a bushy plant with seeds that can be mixed with fuel to form biodiesel. 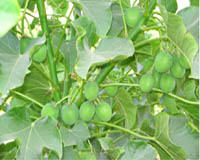 The government has earmarked 500 million rupees (US$10.7 million, 8.9 million euro) to give a boost to the cultivation of jatropha, India's junior petroleum minister, a top official Dinsha Patel told lawmakers.

Hoping to spur large-scale jatropha cultivation, the government is also funding a project to grow seedlings in nine Indian states, Patel said Tuesday, saying the project is aimed at showing farmers the financial and ecological benefits of the oil-yielding plant, AP reports.

The country spends millions each year importing fuel for its growing economy, and officials here see jatropha as a potential wonder plant.

It grows in the kind of arid terrain that accounts for 20 percent of India's land, and doesn't need regular irrigation.

The Petroleum Ministry estimates that by 2009 India will have around 3.1 million hectares of jatropha plantations, and will have identified another 40 million hectares of wasteland to grow the plant. The ministry also aims to plant around 7.5 million jatropha saplings on vacant land along the country's extensive railroad tracks.

With India's economy forecast to grow at more than 8 percent annually over the next few years, the country's energy demand is expected to grow exponentially. India imports nearly 75 percent of its fuel and its oil import bill for the year that ended March 2006 was a whopping US$ 39 billion (32.5 billion euro).