Boy George to do trashy job

The agency planned to send him to pick up trash from the city's streets, issuing him a shovel, broom, plastic bags and gloves, spokesman Vito Turso told the Daily News last month. 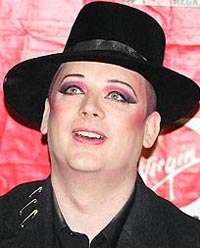 Boy George to do trashy job

The singer, born George O'Dowd, has struggled with drug problems for years. He called police with a bogus report of a burglary at his lower Manhattan apartment last October, and the responding officers found cocaine inside.

In June, Manhattan Criminal Court Judge Anthony Ferrara issued a warrant for the singer's arrest when he initially failed to complete the requirements of his plea deal. When O'Dowd appeared in court 10 days later, Ferrara called off the warrant but warned the singer he could not escape his community service commitment, according to the AP.

Defense lawyer Louis Freeman said the judge's annoyance was "based on a misunderstanding."

He petitioned to spend the time helping teenagers make a public service announcement. Among his other proposals to the court: holding a fashion and makeup workshop, serving as a D.J. at an HIV/AIDS benefit or doing telephone outreach.